Seven more reasons why unmodified Santa 1996 norns should not be crossbred to breed.

Download them if you wish to view their uniqueness close-up, but remember to use the oringal Santa '96 sprites

This effect only occurs when you use the official version of Santa.
If you use the Santa Project's complete breed, this will not happen, and they will look more usual. 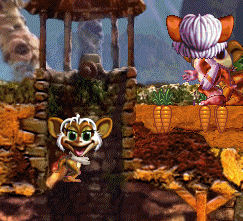 Sinking is one thing, wandering on the surface is quite another:

Since receiving them I discovered they are second generation norns, hexed to be extreme green in pigment.
Since I have no reason to believe she would deceive me, I assume that she installed some sort of strange cob, or the Grendel basic genome was somehow overwritten.
Perhaps the Grendel Mother has been sleeping around? Maybe she is planning on taking over Albia with her pod spawn...