This page is dedicated to weird things and happenings in Albia. Some are common place, others are occasional and have been mentioned by others, some are rare or I have never heard of any others experience them.
I took the idea for creating this page from Creatures Jungle - thank you Freya and keep making those excellent cobs!
(the Weird Norns page has been moved here)

Possessed Lemons and Other Objects

From time to time lemons you will see lemons (usually) floating horizontally at norn head-height  in and around the garden area of Albia. As they float along they often pop in and out of existence (or become alternately visible and invisible). This seems to be a common problem but not a serious one. If left alone they will disappear. If you try to pick them up, Creatures might crash, or they might turn into perfectly normal, gravitationally-bound lemons.

Note that in this picture you can see 19 hour old Danny, with his great-great-great-granddaughter Io (1h 40m), he impregnated her shortly afterwards!

Having enough of luring honeypots into the sky, this one has broken down and refuses to move, stranding this norn.

From movers that won't move to movers that wont stop, this one has broken it's circuit and is wandering arounf the caverns of Albia.
I've seen this phenomenon a few times. 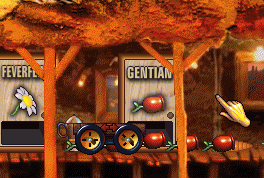 Black holes of No Return!

Black holes are places between rooms where objects disappear, the largest one is in the middle of the large ocean, two smaller ones exist at either end of the small ocean. The photos below show what happens to a line of cheese dropped onto the sea and ocean. Notice that some of the cheese have vanished! There exists a cob made by Slink for sealing them up so they are rendered harmless.

This black hole occupies the space immediately to the right of Albia's seam.

These two smaller black holes sit next to each dock of the small sea.

For some reason the walls in the theatre have been emitting zeds.

Presumably the various statures in the temple are ancestors of the norns, they look similar in many ways to the Ron breed and the original norn sprites (full.spr). I count a total of thirty one statue heads.
As you can see, there is a small monkey-like statue outside the temple. There are two identical norn busts on the walls in the main floor and the basement. On the lower left façade there is a small terrier-like norn head and immediately above it is a fox-like one. Similarly on the right hand façade there is a badger-like statue head. On top of the temple there are three complexes composed of six, fourteen and five heads going from left to right. 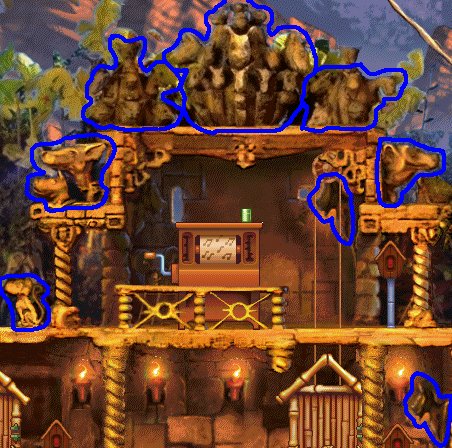 I assume that the temple was built by the Ettin at the orders of the Shee, long before the current norn breeds evolved. The temple seems to be a dedication to at least five different ancient norn breeds by the Shee.

This evidence indicates many previous norn breeds, all intermediate between the first Ron norns and the modern Horse, Pixie and Banana breeds.

Occasionally the Submarine has been known to sink beneath the ocean into Albia's core to be destroyed, taking any occupants with it. Cyberlife created a cob patch to fix this.

Norns sometimes appear to be looking at an egg that appears only in their viewer - surrounded by clouds and blue sky. I once thought that this meant the norn was dreaming of having children, but now it is apparent this is merely a game fault. If you go to the world's seam you will see the unusual object.

The incidence has been known to cause the norn cult "Eggism", as coined in a question to Ask Laura.

I live in the C1 Albia, and recently the Hand has been very good to us in the way of COBs. Life has been lazy and slow - a change from running scared of the Grendel! One day, I was going about my business, and I noticed a strange egg in the sky... For some reason, I can't get it out of my head, and all I want to do is join with it. The Hand doesn't understand me any more - It wants me to do petty things like "push food". How can I explain to it that all I want is up there in that egg?

Why don't you start an alternative Norn cult, say, "Eggism"? You and your fellow "Eggists" could be shamelessly brainwashed into thinking that the "Great Egg One", (or in Nornish, "Gah Geg No") is even more higher and mightier than the Lone Shee himself! Your daily routine would include pledging allegiance to "Gah Geg No" morning, evening and before and after meals, momentous sacrifices of cheese and singing bleak, dreary songs of worship around the lighthouse. Your life would be one of servitude and oppression and your Hand would be powerless to intervene - for remember, "Gah Geg No's" authority overrules all! ;)

Others suggest the use of Object-be-gone, to prevent the unusual behaviour of these norn cultists.

One day, as I was teaching my newest norn - the cart from under the ocean wandered by! I have no idea how it managed to break loose and plough it's way around the subterranean world. I tried to stop and reverse it but it merely broke down and refused to budge. When I later made a new world, it worked perfectly

Today I was teaching a young norn called Frigg to eat whilst on the raft beneath the garden. I tried to pick him up just before the raft docked in the east and Frigg vanished!!!
He disappeared from the norn menu completely, but luckily I could reload the world and save him from his strange fate.

Creatures have a problem if they try and lift a particularly large egg:

Some eggs simply do not develop and are locked as tiny eggs forever.
Other users have experienced and documented this phenomenon.