After eight years of (non-continuous) work the new world for Creatures is finally ready.

It is based on one of Bastian's worlds and as such any adult creature can mate with each other regardless of sex or species,
and therefore ettins grendels and shee can breed in this world.

The population gap is set at 48, although the game engine struggles past thirty so be warned!

The world has many plants, trees and therefore plenty of edible stuff for your creatures.
This is version 1.1, and further updates will be released on this page.

A special thanks to the belated
Max Jerome (SteerPike),
whose work lives on in the form of:
The Donut Vendor
The Pretzel Vendor
Congas
Bong
Toy Hand
Eye-ball
Penguin
Lava Lamp

Helen for her Blue Flower sprites,
Dr§mile for the Mini Gentian,
J. Martin for the Mint,
Spirit for the Sunny Flowers.
Also to the creator of the pink flowers.
Jeff D for his Bananas

Macro Gregoid and the Spore Ettins makes use of the following breeds, so thanks to

A project I abandoned a while ago has been blossoming lately, here is the latest map:

As you can see there is a greenhouse complex to the west for tropical fruit & flowers, a large forest with an extensive treehouse town.
There's a small building then a lake then a couple of islands. note the sun and two moons, and general lack of water.

Added photographic backdrops and later, soil to the world, makes the underground look warmer.
The backgrounds look pretty good and add a lot of realism. I added the Ashton Memorial of Lancaster (UK) for some local flavour :-)

Added photographic clouds to the world. They took a lot of cutting out and tweaking but the end result was worth it.

Last night I couldn't sleep well due to the humidity so I outlined the backstory for Nualbia, fleshed out a little in the light of day:

Here is a wrapped version of the map showing how I visualise the planet spinning in space: 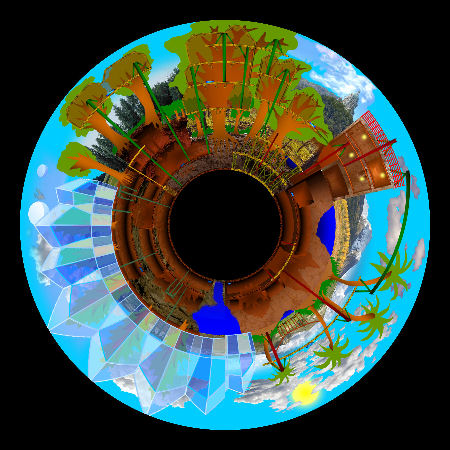 Currently I'm flummoxed by faulty lifts whilst using Slink's lift installation cobs.
I plan to solve this by making my own based on the ones I made for The Treehouse

I have decided I will be using Slaterbait's Macro Grendels hatched from a modified version of my Macro Gregoid that will live under the eastern island and keep the grendel population above six or so.

I will also have an Ettin Mother of somesort, probably organic, and using Gaz's & Norngirl's Ettin sprites along with the Ettin Family, Plague Ettins, C3 Ettins and Glettins.
This will give me six ettin breeds to play with. (this is what ended up being released as The Spore Ettins)

Today I finished the images for the basket lifts.

They are based off the original Albian ones, but shorter and more bambooey

I have modified and installed the new Spore Ettin Mother!

I put a lot of work into the background as you can see below.
It is a complex composite of photos and has Europa and Titan as moons.

I updated and improved the Coloured Shrooms cob for Zeruko.

Today I fixed the strange colouration of Slink's catnip ball

Today I worked hard on foreground objects and made fore.spr I did some more work on the background.

It includes several elements from C2 & C3 and is mostly plants, rocks and pillars.

I converted the background to the Creatures palette, which I wish I had tested earlier as it messed up some fo the clouds!
Then I blended some of the sharper edges to make it a more cohesive picture.

I noted a few days ago that Zeruko will not work, so I'm trying to recreate it from the sprites and cobs I have lying around.
Thank the gods that I keep all my old project files!


I started work on the third foreground sprite set. It will be mostly trees and rocks.


Today I converted and playtested a great many cobs to work well in Zeruko, mostly food and living things.


More playtesting and editing of cobs.