Whilst playing around with a norn genome, I realised that you could give a norn two genus genes and sex-link them.
In this way, I theorised you could have, for example, a male norn with an inactive female grendel gene. So some of his daughters would be grendels (the others would inherit the usual norn genus gene from their mother).

I finally decided to create a pair of norns and a pair of grendels, all of which had genes for the opposite sex and genus.
To keep it simple, I used the RHE5 genome as the base, and kept all appearance genes as type 0
which will mean banana norn or regular grendel, depending on the genus.

I created two genomes in the end, the Male Norn Female Grendel (MNFG) and the Male Grendel Female Norn (MGFN).
From them I produced four creatures, a breeding pair of Norngrenorns and another of Grenorndels.
Technically Nora and Gerald are a pair of twins as are Norman and Gertie.

Note that the creatures provided have a few minor mutations, and so the original genomes are provided as well.
Also, if you want the grendels to have child and elderly sprites, download and install them.
I'd also recommend Jessica's updated grendels for better sprites.

An earlier version of this project was called grelloran, which has a better ring to it.
Here is a family tree of them: 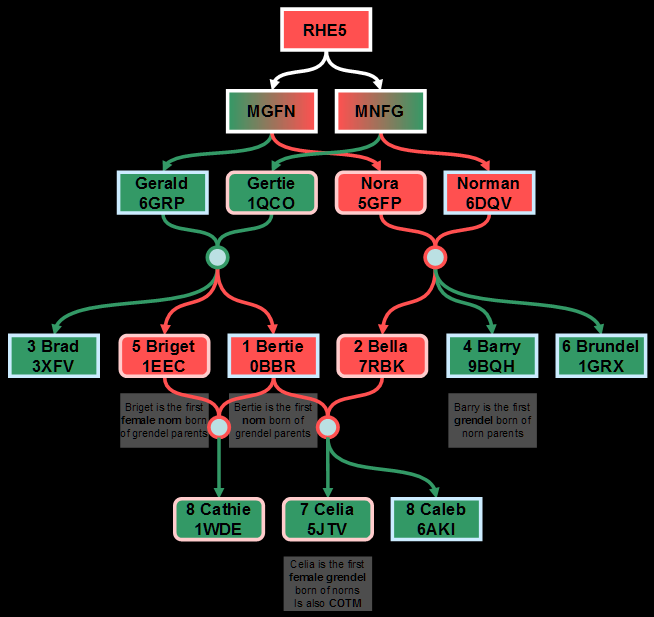