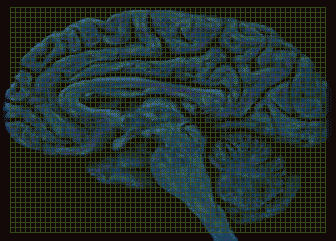 Putting these two diagrams togetrher we get this flow chart 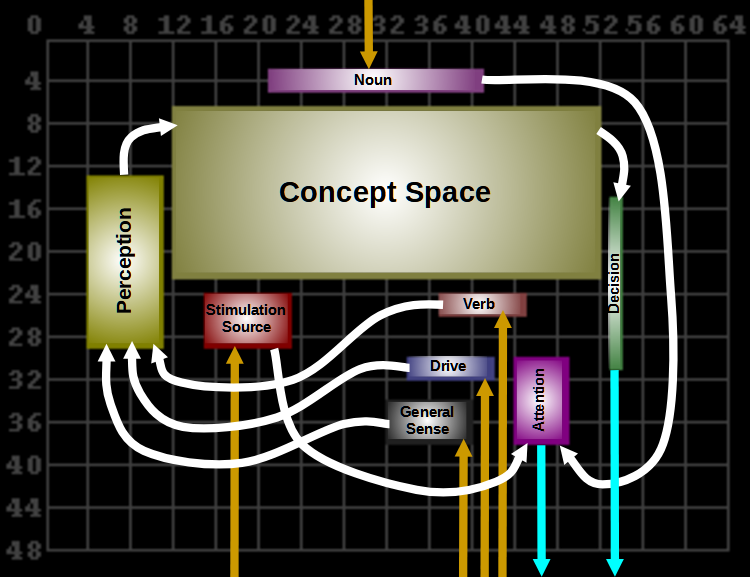 The brain can be divided into three basic parts: information collection, information processing, and output.

1) Most of the brain lobes are dedicated to collecting information about the Creature's environment - for instance, there is a lobe in which neurons fire if the hand says a particular verb. Each neuron of that lobe has a different verb associated with it (called the verb lobe)

Having a cob teach them words would leave a much weaker impression, since creatures get no particular emotional buzz from doing this, unless the hand tickles them for it. The concept lobe, then, is comparable to our memory - we too remember important events far longer than non important ones.


3) The final part of the Creature brain is the decision lobe. This is connected to the combination lobe, and this is where the memories of actions is used to decide upon the best action in the current situation. 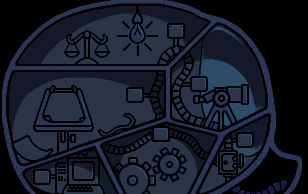 Norns' brains are divided into seven lobes. These are groups of Neurons with similar properties. Each lobe connects to the outside world via sensory organs or motor organs (muscles, etc.), or makes connections to one or more other brain lobes.

These five lobes receive data from the creature's senses, such as vision, hearing and touch.
Certain kinds of data go to certain sensory lobes, (drive, verb and noun lobes)
where they become involved in specialized brain activity.

The Verb and Noun lobes deal with the information in the words spoken by the user.

The Stimulus Source Lobe takes note of which object is the source of the stimulation acting upon the norn.
For example if a grendel slaps the norn, the source of the "slap" stimulus is the grendel. Information about the source of a sound or movement goes to a lobes concerned with directing the creature's Attention.

As its name suggests, the General Sensory lobe is the primary device for sorting sensory data.

Much of this low-level activity is 'subconscious,' however, much of the data is also collated and sent to the large General Sensory Lobe feeding Concept Space where a creature's main perceptive and memory mechanisms reside.

This small region of highly dendritic (many input fibers) neurons receives impulses from Concept Space and seems to be implicated in the forming of decisions about a course of action.

Sufficient stimulation of a given decision neuron always invokes a single action, for example one decision cell seems to control a creature's desire to approach the object he is attentive to.

This lobe controls the creature's attention, and is fairly straightforward.

Signals enter this region whenever a nearby object makes a sound, or is seen to move, and the object which makes the most fuss over a period of time is likely to be the one which the creature focuses on.

This lobe also seems to be involved in goal-directed behavior, such as the seeking out of food when hungry, however this mechanism is not well understood.

By far the largest region of a norn's brain is used to store memories of the events that occur over its lifetime.

This region is called Concept Space, and seems to be involved in the collation and organization of a norn's perceptions and experiences. We know that the neurons in this region are very mobile, and are constantly reconnecting themselves to the main sensory lobe in response to new experiences.

Artificial stimulation of these neurons can trigger outward behavior, but it is not certain what the relationship is between a given neuron and the behavior it produces.

The creature brain consists of a number of brain lobes made up of connecting together with dendrites. The lobes are each a grid of squares, where each square on the grid is a neuron. Neurons are basically placeholders - they store information that the game engine then interprets.

Dendrites link neurons in different brain lobes together, carrying information between them in one way only.
Some dendrites are static for the entire Norn's life. Other dendrites are motile, although they always connect between the same two lobes.

These movable dendrites have connections that can be strengthened or weakened, and when a dendrite connection becomes very weak, the dendrite wanders off and reconnects elsewhere. Therefore, this can be used to store memories of important and not so important events in the Norn's life.

The whole point of emergent behaviour is that the exact behaviour cannot be specified - it arises out of the whole system.
Generally, to produce dramatic changes in the behaviour of a creature involves changing not only the brain structure, but emitters, receptors, chemicals and chemical reactions. 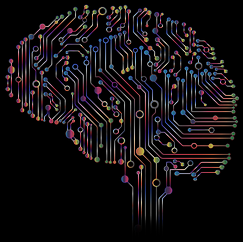