According to Steve Grand in his Mythography, Grendels were originally going to be
"A Grendel is a solitary, highly pugnacious creature, resembling a huge, titanium spider."

Grendels, or Cyberlifogenis vicious, are the first product of the Shee Experiments, before after the ettins and the norns.
They breed in an unusual fashion.
They are probably asexual or perhaps eusocial in that the solitary male grendels you will see in Albia (C1 or C2) are sterile, as if they are some sort of worker or soldier caste.

The only naturally fertile grendels are the grendel mothers, which seem to produce eggs without being mated, which instantly hatch into fully-grown male grendels.
The grendel can be made to create females, but they are similar to the males in that they share a similar appearance and are also infertile.

It could be that the grendel mother in the original Creatures is somehow damaged or mutated and her infertile children are somehow sterilised as a result.
Besides the original grendels, there is also a breed of fertile grendels that grow and reproduce in a similar manner to norns that can be introduced into the world.

A similar story can be seen on the Shee Spaceship, a grendel mother, with a drastically different appearance can be seen giving birth to male children - with a difference that they are perfectly capable of fathering children, but there are no natural females present. 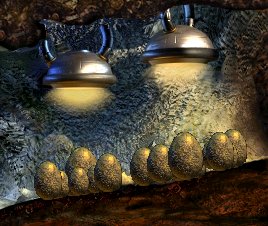 The only real mystery is in Creatures 2, where grendel eggs seem to grow out of the ground with no obvious presence of a grendel mother. These grendels are also sterile. Again there are fertile versions of the same grendels in existence.