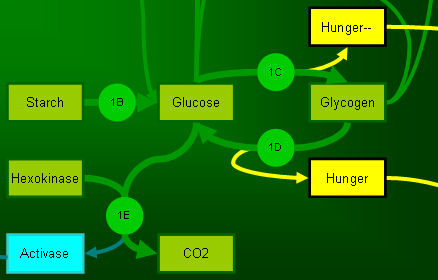 In a normal norn, one gene is responsible for the enzyme that allows three glucose to turn into one glycogen, another gene codes for the enzyme that turns it back again.
This means that glycogen and glucose are interchangeable, but glucose will usually out-number glycogen.

The only natural way a norn can get more glucose or glycogen is by eating. Although norns can receive intravenous glucose from Energy injections or via injections from 3rd Party cobs such as the Autodoc.

Food contains starch that breaks down into glucose. This image shows the stages of eating:
(1) food is eaten, starch levels shoot up and hunger plummets.
(2) As starch is broken down, glucose rapidly increases to maximum.
(3) Glycogen levels begin to build up after a time lag, glucose levels remain at maximum.
(4) Starch finally runs out, glucose levels begin to fall to normal levels, glycogen gradually levels out at 77%,
assuming the norn is healthy and well fed

Hexokinase is the main reason for loss of glucose, it is produced by the muscles and breaks down glucose  to provide energy for movement. In this experiment a norn was injected with hexokinase (far above normal amounts).

Hexokinase quickly peaks and plummets, glucose plummets then climbs relatively slowly as it is replaced by glycogen being broken down. An equilibrium is reached, but with both glucose and glycogen being at levels lower than before.

Note that in normal situations, hexokinase production is continuous, but considerably higher in active norns than resting norns.

Other chemicals that remove glucose are the antigens, adrenaline, gonadotrophin. This is because it takes energy to produce antibodys from antigens, when a norn produces adrenaline it needs to be active, gonadotrophin shows the "eating for two" effects of pregnancy.

Glycotoxin is a poison present in the Deathcap mushroom, it rapidly consumes glycogen, an extremely dangerous reaction.
Geddonase is a similar but less severe toxin, present in the bites of cave flies.